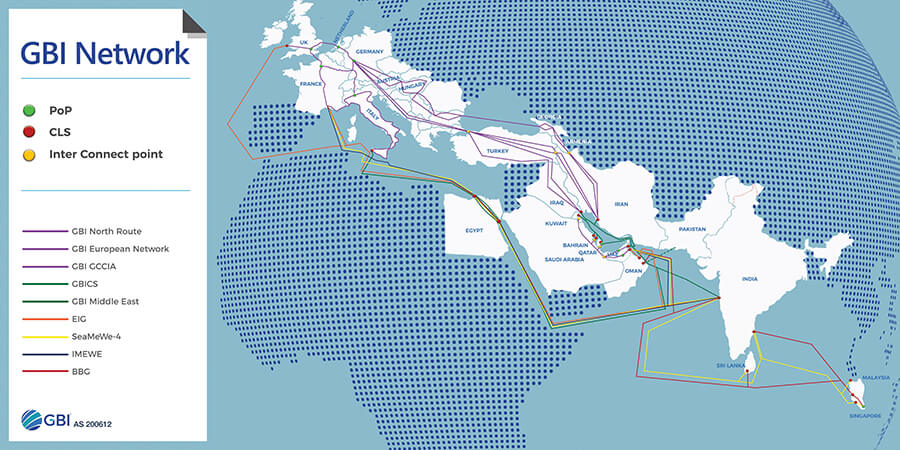 98% of the world’s internet traffic is carried by submarine cables. From enabling video calls to initiating bank transactions, these conduits are crucial to the makeup of today’s society. They not only have vast economic benefits, boosting industries from manufacturing to financial services, but with data demand increasing, it’s clear that subsea cables have a pivotal role to play in the world’s infrastructure and technological revolution.

While their significance in the global connectivity landscape is undoubted, the routes they take are not as simple. This is because there is a multitude of ways content can be connected and a host of destinations that traffic can travel through before a person sees their colleague's face on Microsoft Teams or completes a bank transfer, for instance.

Think about it this way; on paper, driving along the highway always tends to be the fastest option from point A to B, but if everyone takes the same route then bottlenecks and accidents occur. Sometimes, then, it may be quicker to diversify and take an alternative route using smaller, local roads. Subsea cable networks are the internet superhighways of the world. While capacity and latency should always remain at the forefront of decisions, the value of having diversified routes should not be overlooked.

The North Route Offers a Viable Alternative From East to West

Almost all subsea cables and traffic from West Asia, South Asia and East Asia pass through Egypt and the Mediterranean Sea on the way to Europe. This means that they are heavily dependent on a single route for all Europe-Asia connectivity – via Egypt and the Suez Canal – which can create bottlenecks. And bottlenecks in this context can be costly, as outages and high latency can impact individuals, businesses and countries on a vast scale.

It’s therefore crucial that there is full diversity for Europe-Asia connectivity, and the Gulf is integral to this. Leveraging cable and assets in Asia, as well as the Gulf countries such as Iraq to carry traffic via diverse terrestrial networks to Europe, provides a multitude of benefits. For instance, latency can be significantly improved.

Adding diversification to existing terrestrial routes through different countries provides redundancy, which means users remain connected in the case of an outage. This is vital in ensuring the continuation of mission-critical operations, particularly as more and more companies accelerate their digital transformation strategies. It’s clear that by diversifying routes through the Middle East and Caucasus region, availability, quality and stability can be ensured for both existing and new traffic too.

It’s no surprise, then, that over-the-top providers (OTTs) are prioritizing such diversification. A significant amount of internet traffic is related to social and messaging platforms, video streaming, gaming, music and backup storage data. Consuming content in this way shows no signs of slowing down either, as data-hungry generations expect more from their devices every day.

That’s why major providers of content, such as Meta, Google, AWS and Microsoft, are now investing in the Middle East. They are putting diversified routes and locally hosted data centers at the top of their agendas to ensure that growing demands can be met and that local customers will benefit from having a better quality of experience for various applications and services. Whether that’s reducing the amount of time a YouTube video buffers or improving the speed at which colleagues can collaborate, a more diversified cable route to and from the region ensures that the Middle East isn’t left behind.

GBI is leading the way in the region to ensure that the Middle East is a safe investment too. For instance, end-to-end remote peering capability is now available by utilizing various Gulf networks and landing stations. This means that ISPs (Internet Service Providers) can enjoy hassle-free remote peering as network providers will be a one-stop shop, enabled by leveraging relationships with suppliers in the region.

Connecting content in this way could not come at a more important time, either, as the region prepares to meet the surge in internet traffic anticipated around World Cup 2022 in Qatar. It’s clear the North Route will play a critical role in keeping the world connected when all eyes will be on the region.

The Need for Diversification

Due to the complexity of the geopolitical landscape and its ability to impact how businesses and individuals operate as well as regional investments, data cables are intrinsically linked to a country’s global standing and security. Just as the Silk Road was once the vital network of trade routes connecting countries from East to West, designed to streamline the transport, exchange, distribution and storage of goods, now, cables provide new trade routes with data as the commodity. And this enables a new complex global power balance. The diversification of cable routes between countries is an effective tool for multiple stakeholders to minimize risk and maximize output.

This is why we should look to providers that can furnish alternative routes to ensure diversity and lower latencies. We need to diversify connectivity routes to enable innovation, connect individuals and businesses across the world, and protect countries and customers. It’s only by working with providers that have multiple routes and options that countries and companies are able to remove bottlenecks, connect content effectively and drive digital transformation.